Fr Tim Galvin works among the Toposa people of Eastern Equatoria, in Riwoto, in the same part of the country as JubaLink. The people are semi-nomadic and often during the dry season run out of water for themselves and their herds. The Toposa people have one of the highest incidences of guinea worm disease, a distressing and disabling illness, spread by contaminated water. Clean water from a borehole would help to eradicate this problem, as well as other diseases such as diarrhoea.

When Fr Tim spoke to JubaLink he told them that he had spoken to a local commissioner recently who had identified an area of particular need. With the money Juba Link provided he was able to go ahead and arrange for the drilling of the borehole. Within a matter of days, civil war notwithstanding, the drilling rig was in the area and at the second attempt a good supply of water was found. With the direction of just a couple of professionals and enthusiastic help from the community the job was completed. In a matter of days, the people were able to draw water from their own well.It is hard to overestimate the significance of this for these people. The supply of water offers possibilities which are truly life changing – and life preserving. It gives them security for themselves and their animals, and will improve the health of the community – fulfilling the original aim of JubaLink.

The speed with which things have moved has been very encouraging for JubaLink and their supporters: a clear example of how effective at the grassroots level a small charity can be. Fr Tim and his parishioners send their thanks to all who have helped. And we all pray for peace to return.

Back to Mission News 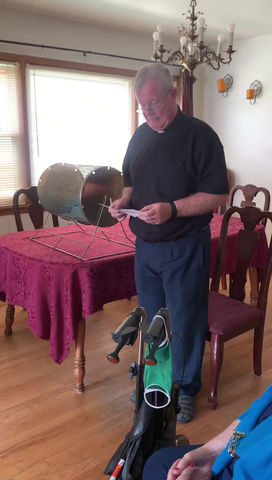